Attached are the final results from the Gwyn Jones Memorial Rally. There have been some minor adjustments to the provisional results announced on the night, now that we have had the opportunity to look at the marshals’ check sheets. We have also considered the comments made as a result of the location of MTC11 not being given in any of the paperwork given to the experts, which meant that the final section had to be solved in order to reach that control, with a couple of crews then not making it in time. On reflection, we consider that the fair and reasonable course of action is to penalise OTL on the same basis as at a TC (30 minutes) rather than exclusion. This has not made any major changes to the results, but means that all finished, apart from Colin and Rhys who unfortunately experienced car problems half way round.

Firstly, many thanks to the marshals, listed below, who enabled the event to take place. Thanks to their support we were able to man all 11TCs and 5 secrets.

Congratulations to Ben Willshire and Derek Harden who, running as beginners, returned the best result of all. Whilst they had the benefit of marked maps, on such a complex route, with a number of not as map triangles, it was no mean achievement to get round the route without missing any of the boards, although they did record the only dummy board on the route, on the short way round a long way round triangle.

The best performance in the other classes, and therefore winners of the Gwyn Jones Memorial Trophy, were Chris Pratt and Glynn Hayward; congratulations to them. They persevered when things may not have been falling into place as normal, and ended up only missing two boards (and also recording the dummy).

We certainly intended the event to be reasonably challenging, wishing to reward the best navigators, and not just the fastest drivers, although we do hope that all did enjoy the route. However, we know just how hard it is to get the right balance, and from your comments it is clear that the navigation proved more challenging than we had intended. We attach brief explanations of the navigation handed out to experts, and whilst it is always so much easier to solve navigation in your living room rather than being bounced around in a rally car, it might be that you will now notice hints that you might have missed on the night, and that would have helped.

Many thanks for your support of the event, most certainly including the following marshals:-

Wishing you all a Merry Christmas and a safe 2021.

FDMC present the Not Yet Boxing Day Autotest 2020 on Sunday 13th December at Brooklands.

Click here for the Entry Form, then return to this page to pay for your entry using a card or Paypal:

Click here for the  Current Entry List (this requires manual updating so your entry will not appear immediately). 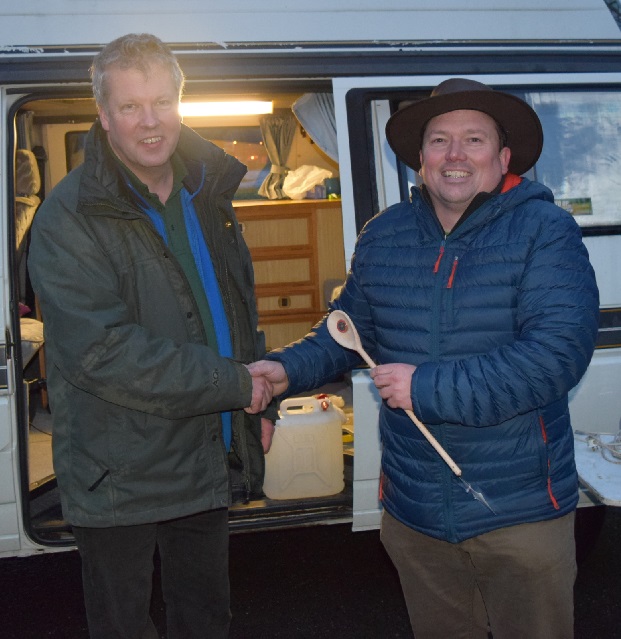 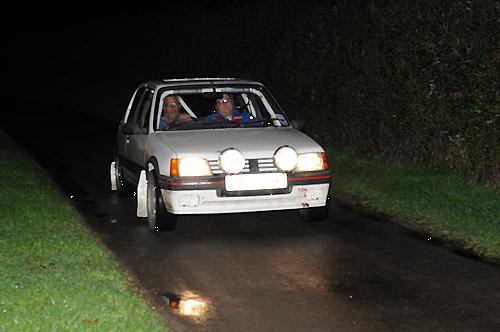 Here are the results for the FDMC Brooklands Autosolo which was held at Brooklands Circuit on 25th October 2020.

Congratulations to winner (Overall Lowest Time) to FDMC’s very own Keith Petit, pictured here on the course in his Austin Healey Sprite, and to Index Winner, Paul Prescott. 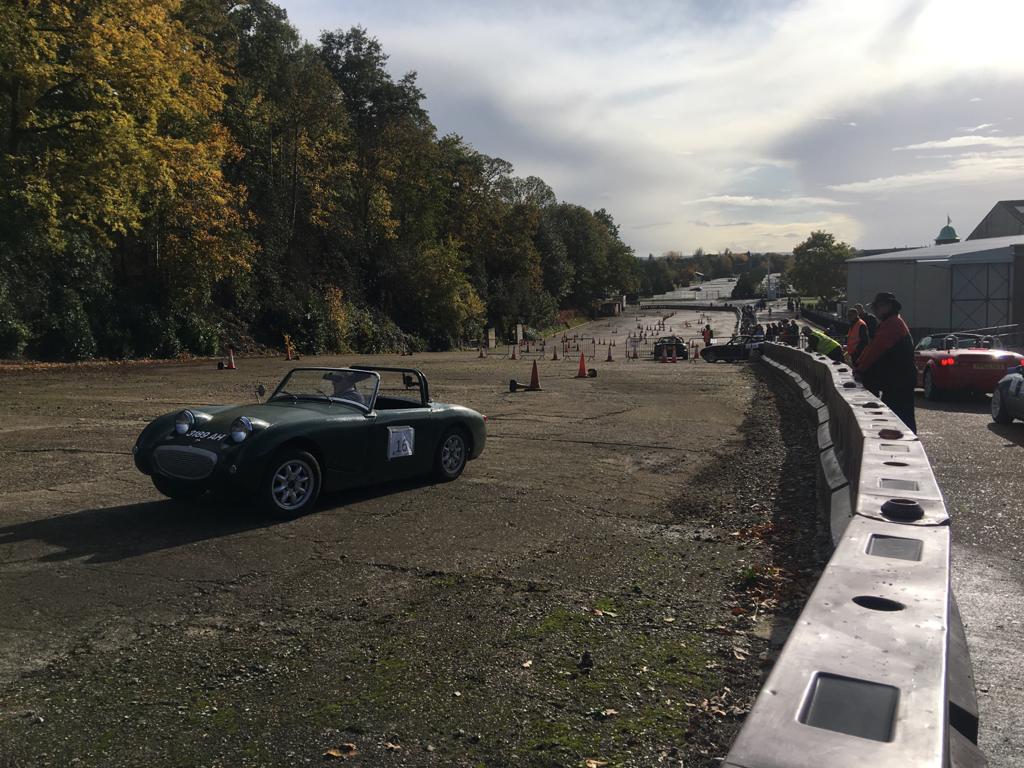 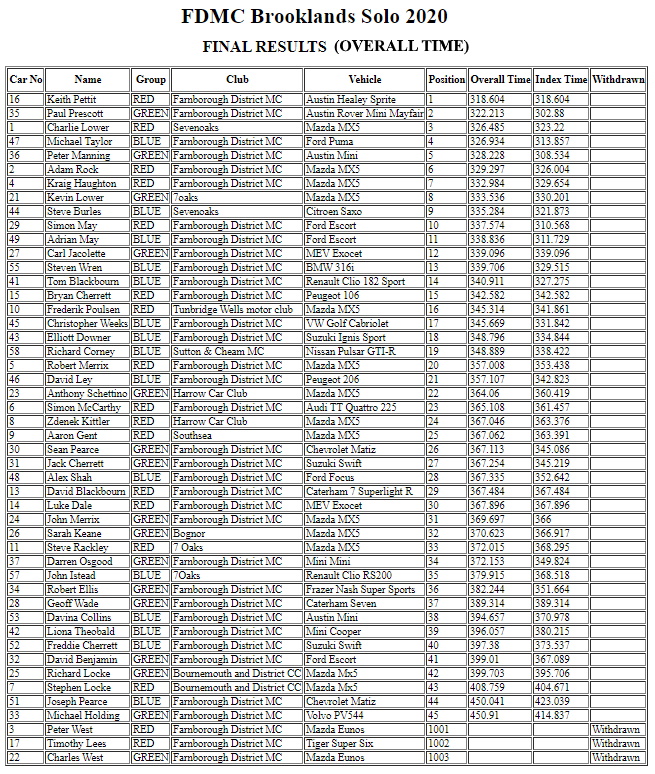 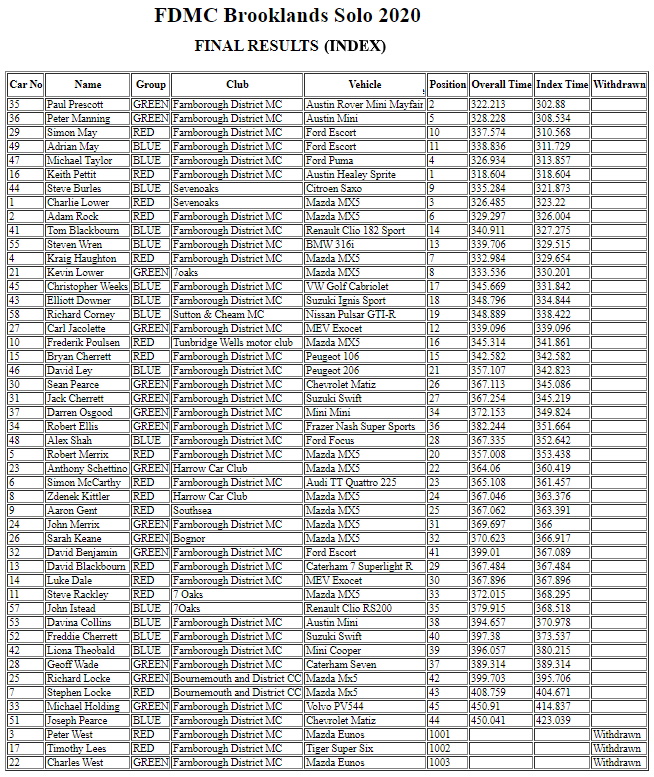 Posted by Geoff Wade, FDMC Media, for the Organising Team 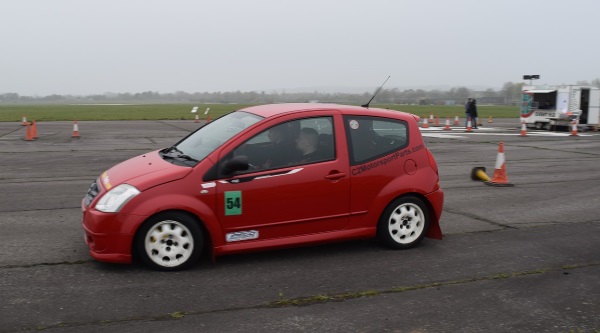 Welcome to a brand new event for 2020, the FDMC Autosolo at Brooklands Circuit on 25th October.

This event is in lieu of the Rushmoor Targa Rally which had to be cancelled because of Covid-19 restrictions.

As a thank-you to Club supporters, current members will have priority entry for the first 48 hours.

Here are the event regs.  To enter, complete the entry form (deleted), then return here to pay using a card or paypal: (deleted).

The current entry list is here (this gets updated manually so may not show recent entries).

Posted by Geoff Wade, FDMC Media, for the Organising Team

The Rushmoor Targa Rally, originally planned for November 8th 2020, has had to be cancelled because of Covid-19 restrictions.

The Committee is reviewing various options for a replacement event – probably not a Targa – and we will share any news asap (paid up Club members will be the first to hear).

Posted by Geoff Wade, FDMC Media, on behalf of the FDMC Committee

Sadly, we have to announce the cancellation of this year’s Autumn Antics, because of additional, C-19 related, venue restrictions placed upon us by the Landowners.

Posted by Geoff Wade, FDMC Media, on behalf of the FDMC Committee 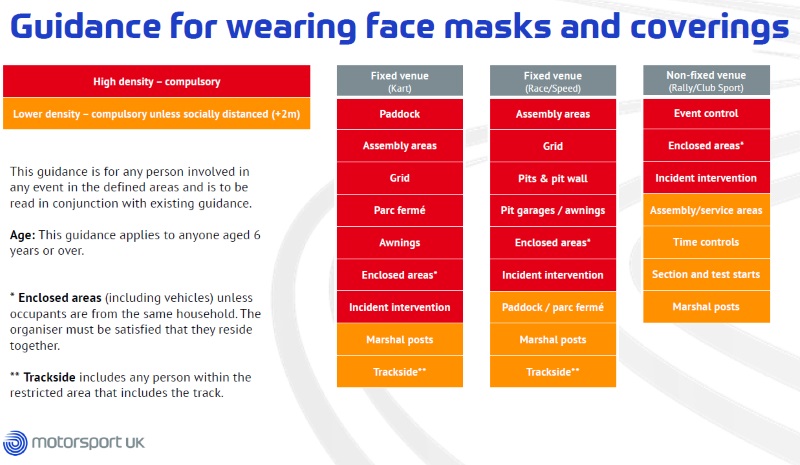 With sadness, the Committee announces the cancellation of our Sprint Royale event which was due to take place on 4th October.

Despite the best endeavours of the Organising Team, the restrictions imposed by the landowners have sealed the event’s fate.

Posted by Geoff Wade, FDMC Media, on behalf of the Committee

Regulations and Entry Form for the SCC Autosolo at Kempton Park on 11th October are on the SCC website here.

One of the major growth areas in club level motorsport is AutoSOLOs. In the past few years, the level of interest among competitors has soared and all the signs are that the discipline is set to gain further in popularity. For anyone who has never heard the term, imagine an Autotest but with no reversing needed in any of the tests – except, perhaps, if you overdo the spirited driving bit.

The primary reasons for the growth are that AutoSOLOs offer a lot of in-car competition time, and most important in these cash-strapped times, they are very good value for money. You also get the chance to practice driving skills that can hold you in good stead in normal road driving.

Southern Car Club will be organising two of these events in 2020. The dates to mark in your diaries are Sunday 31st May 2020 and Sunday 11th October 2020. Both will be held at Kempton Park horse race course in Surrey and interest in the events is such that we have already applied to and been accepted as rounds of the ACSMC AutoSOLO Championship. Further details on how to enter will become available nearer the date. One of the main requirements of AutoSOLOs is that participants do a stint as marshals in between their competitive runs. This rule alleviates some of the problems of getting marshals but additional marshals for the day will be welcomed with open arms.