Welcome to the FDMC AutoTest taster event at Shere Hillclimb 2021.

Dickie Dale has emailed the Club with some sad news:

“Brian Groves died last night of a brain tumour.  He was a founder member and the first editor of the Club magazine.  After typing each page he printed them out on an old troublesome Gestetner machine, then sitting on his lounge floor we would staple them together and deliver some by hand.

His daytime job was Motoring Correspondent for the Daily Mail, from which he used to get interesting bits for our magazine.

After leaving Farnborough he moved to Guernsey and made his
fortune in the Courts and then with Nissan (as a property buyer!). A while before he died he sold both his aeroplanes and his luxury boat!”

All current FDMC Members, and your partners, are invited to the annual FDMC Christmas Party on Tuesday 17th December. As last year, we will be hosted at the Plough & Horses Pub in Cove. There’ll be sausages & chips provided with mince pies too. The pay bar is open from 11am but most club members arrive for 7:00 to 7:30pm with the food to be served at 8pm. 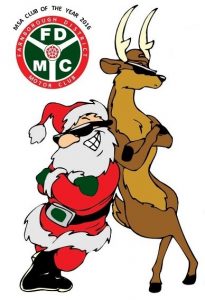