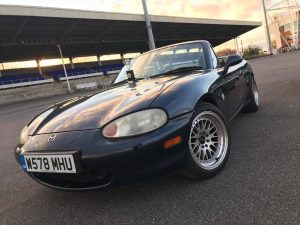 There we were, all ready for another fabulous season of Soloing, and March hit us! First, the Isle of Wight Sprint was off, and we all dashed about cancelling our ferry and accommodation bookings, and then things got worse. The April Solo had to be cancelled, along with Sutton & Cheam’s Long Course Sprint, and we slowly realised that no one knew when we would be able to play again. Our cars stayed at home, and for some of us, our bikes were dusted off and tyres pumped up. The spring and summer weather were glorious! But it seemed unlikely that it would be worth trying to run a Solo Challenge in 2020.

Then, during June it appeared that some activities might be allowed to start up again in some way the following month. Negotiations at many levels were being conducted, and so plans were put in place for a Solo in early July at Bordon. Lots of hard work interpreting and incorporating new “rules, regulations and guidance” was conducted, and the green light was switched on. Then, even before the July event happened, the Long Course Sprint came back on the calendar for August. So our management team sprang into action again and we had some regs out for a Solo on the same day at Abingdon.

The July event at Bordon ran well, so the team for the September Solo tweaked the paperwork in the light of evolving understanding of the world situation, and we had a third Solo attracting entries. Three steps forward! But then, one big step back… Some bright spark within the Defence Infrastructure Organisation (DIO) decided to interpret “rules, regulations and guidance” in a totally different way to the rest of the world, so an entirely different way of running an FDMC Solo was rapidly devised by our hard pressed team. Although not ideal, and incredibly stressful for the team, it worked! We now had three sets of results, and if we took up the option to include Southern Car Club’s Kempton Park October Solo in our Challenge, maybe we could work out some winners for 2020 using the best three scores from four events.

Well, we gathered together all of the results and generated a table, as in previous years. So what did we find? All will be revealed!

Class A, for pre-1980 cars has a new star! New member David Benjamin competed in 3 of the 4 rounds, and came out well clear of 4 others to win the class in his Mk1 Escort.

Class B for saloons up to 1400cc had 17 contenders, although no one managed to score in all 4 rounds. However, with the help of well-deserved organiser’s points, Peter Manning came out on top, heading off Jon Maddison’s Fabia by less than two points with the help of his (t)rusty Mini! Actually, that description better suits my car (PP). ☹

Class C for saloons 1401 to 1800cc did one better with 18 contenders. David Ley must have been desperate for a trophy, as he competed hard in all four rounds in the Pugeot 206, coming out 4 points ahead of the first Junior driver, Thomas Eckett in the MINI Cooper. The only other driver in class C to score in all 4 rounds was the next Junior, Elliot Downer, finishing a fine fourth in the class in his Ignis Sport.

Class D for saloons over 1800cc was less well supported this year, with David Wright bringing the Civic home ahead of 10 other scorers with three good scores.

Class E for production sports cars produced 22 scorers, and 5 of these scored in all 4 rounds. The battle between father and son, Jim and Claude Matons was resolved with Claude just half a point ahead of dad. But neither could match Kraigy, who proved that you can’t beat a borrowed car, with 4 first in class scores.

Class F for everything else proved a challenge for Keith Pettit and the Sprite this year. But he still came out in 2nd place from seven scorers with the help of those equally well-deserved organiser’s points. However, the star of the class was definitively Kacper Potyra, who still as a Junior, has the added handicap of hauling his dad around the course in the passenger seat of the Citroën C2. Kacper finished 3 points clear of Keith.

OK, I know the suspense is killing you all. You just want to know who were in the top three places overall. You’ve probably guessed that it’s seemingly impossible to beat a consistent winner in a class of 22, and that’s right Kraigy Haughton coaxed a winning 39 points out of his dad’s standard MX-5. Congratulations, Kraigy!

2nd overall, with 32.25 points was Kacper Potyra, whose future performances look set to be even more astounding. Keep up the good work, Kacper!

3rd overall, and we’re back in class E with Claude Matons and the Mk2 MX-5 on 31.5 points, leaving the class award to dad, Jim in the supercharged Mk3.

As hinted at earlier the award for the best Junior passed from Kacper to Thomas Eckett from class C, who finished with 26 points in 11th place overall out of 76 points scorers. Well done Thomas. But watch out, Elliot’s on your tail!

This site uses Akismet to reduce spam. Learn how your comment data is processed.